The children’s recreational and leisure institution “Cosmos” is owned by PJSC “Azovmash”. The children of workers and employees of the enterprise spend their summer holidays there.

The children’s recreational and leisure institution “Cosmos” is situated on the coast of Azov Sea at the distance of 60 kilometers away from Mariupol in Donetsk region, and it is rightfully regarded as a gem of Azov region.

The history of the children’s recreational and leisure institution “Cosmos” dates back to 1962, when near Yuriyevka settlement there began a coastal development upon the initiative of Vladimir Fedorovich Karpov, the Director of Zhdanov Heavy Engineering Works. According to the project plan there was built a camp for the upper-form pupils who could combine summer vacations and work in the fields of the affiliated collective farms. The building and construction works lasted one year, and in summer 1964 the camp for rest and work invited the first visitors. In 1966 the upper-form pupils rendered their camp for juniors and from that moment it was given a name – a pioneer camp “Cosmos”.

Why was it called “Cosmos”? Why cosmic theme? The 60s of the last century were marked by the space exploration. The Soviet Union with Ukraine as its member was a leader in the Universe exploration sphere. It was fashionable and prestigious to give cosmic names and names of the cosmonauts to schools, groups, teams, military subdivisions, ships and other objects. But the connection of “Cosmos” camp with cosmos was particular. The fact is that in those years Zhdanov Heavy Engineering Works “Tyazhmash” was one of the leading enterprises in the Soviet Union that manufactured the refueling equipment for space-launch complexes. The well-known scientists and famous pilot-cosmonauts went to the enterprise. They both solve production tasks and communicated with the children of the employees and workers with a great pleasure as well. Therefore the pioneers of “Cosmos” camp began to study the history of space exploration enthusiastically. The young searchers collected materials about the famous space explorers, about people, who made personal contributions into the development and designing of the various space systems. The young pioneer team filed a request with All-Union Lenin Communist Youth League Committee of the works to name it after Sergey Pavlovich Korolev – the well-known design engineer in the field of rocketry and cosmonautics, an Academician of the Academy of Sciences of the Soviet Union, a Laureate of the Lenin Prize, a twice hero of socialist labour.

The children held correspondence with S.P. Korolev museums in Zhitomir, Odessa and Moscow. Later they came to see those museums for many times, visited design engineering bureau in so-called “Star city”, met Korolev’s mother and daughter.

In 1973 there was built an alley of cosmos heroes, and in 1974 the Museum of cosmonautics was founded in the children’s camp. In June 1975 German Stepanovich Titov, the Hero of the Soviet Union, the second cosmonaut who took a flight into outer space, a pilot-cosmonaut paid the pioneers of the “Cosmos” camp a visit. In July 1975 the bust monument to S.P. Korolev was unveiled and the young pioneer’s team was named after that notable man (who is a symbol of the present-day “Cosmos”).

Over a number of years the interest group of the young cosmonauts was functioning in “Cosmos”. In 1983 the Children observatory was created the work of which was headed by the specialists from the Donetsk planetarium. The children studied the stellar maps; every day they watched stars and celestial bodies in the telescopes.

At the end of the 70s at the Production Association “Zhdanovtyazhmash” the number of employees was increased due to the growth of production output. The question of building a new pioneer camp came up because of the shortage of places in the recreation camp for the employees’ children. In 1981 the new building and construction works began headed by Igor Dmitriyevich Nagayevskiy, the Director of ZhZTM. In 1984 the new pioneer camp “Cosmos” welcomed children. It was designed for 960 persons and possessed all the things needed for a good, interesting and comfortable rest and recreation of the children: cozy dormitory blocks furnished with all conveniences, club, open-air stage, numerous sports facilities, and premises for hobby groups and circles.

From the time of its opening the pioneer camp “Cosmos” became the favourite place not only for boys and girls from Mariupol, but also for the children from Russia, Social Republic of Romania, Poland and Germany. In 1986 after the catastrophic nuclear accident at the Chernobyl Nuclear Power Plant the children from one of the Kiev schools spent the whole summer holidays in “Cosmos”.

At the beginning of the 90s the pioneer organization to the work of which the pioneer camp “Cosmos” was oriented stopped its work. And in 1992 the pioneer camp was renamed as the children recreation centre “Cosmos”, in 2010 – the recreational and leisure institution “Cosmos”.

Nowadays “Cosmos” is a big “planet of childhood”. Organizing active rest of children and their recreation is the priority for work of the whole pedagogical body of the institution. Every year young sportsmen from the sports club “Azovmash” (Graeco-Roman wrestling, basketball clubs) and the children’s on-stage performance groups from Palace of Culture “Iskra” spend their summer holidays in “Cosmos” revitalizing themselves and upgrading their professional skills.

Today the children’s recreational and leisure institution “Cosmos” can invite up to 640 children. For the whole summer they have the possibility to sunbathe at the coast of the sea and go in for sports (the sports complex of the institution includes the stadium with 1000 seats, 2 grounds for football game of five-a-side, 3 basketball and 3 volleyball courts, grounds for table-tennis). The psychologist helps the children to improve their skills of the effective social communication in the Communication Club. Daily 10 creative workshops of the “cosmic” art centre open their doors for boys and girls, headed by the experienced teachers and taught to:

In 2004 the Museum of History has been opened in “Cosmos”, and it is fully functional today.

Each session in “Cosmos” is a striking, unforgettable, thematic journey which includes theatrical performances on the sea beach, various games, contests, intellectual programs and shows.

“There is something exceptive, enigmatic and new in the pioneer camp just as in cosmos” – this V.F. Karpov’s statement has become eloquent. And today the pedagogical team of the children’s recreational and leisure institution “Cosmos” plans its work in the way to bring the children lively colourful emotions and new discoveries with every new day of holidays and at the same time encourage the feeling of some impenetrable mystery to be revealed captivating the children minds generation after generation. 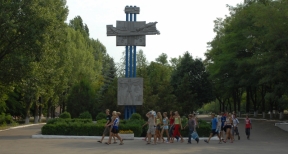 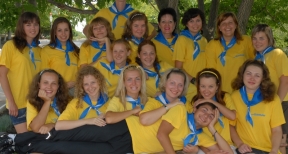 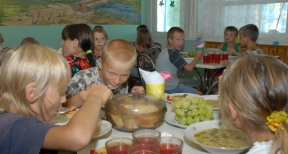 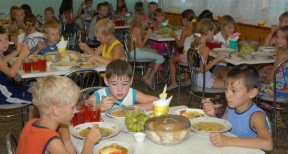 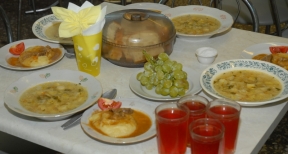 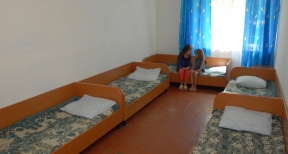 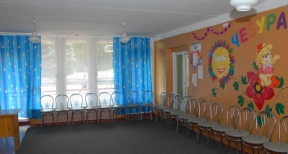 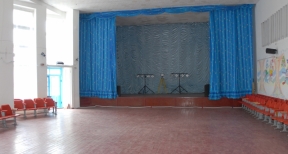 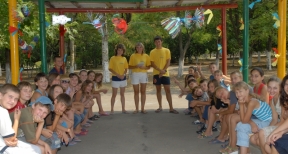 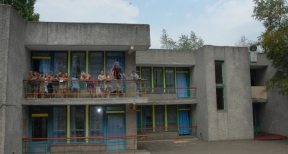 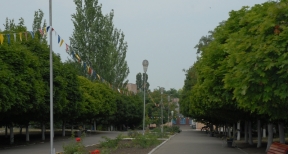 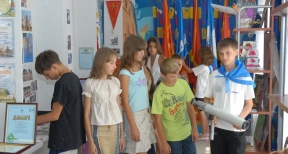 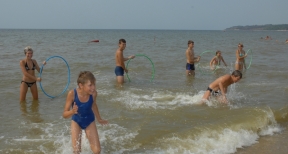 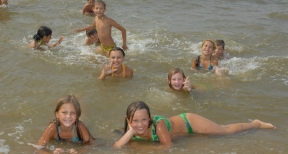 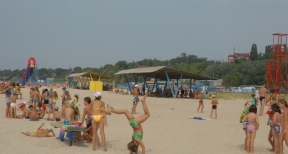 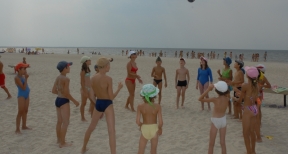 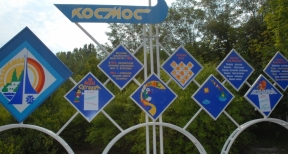 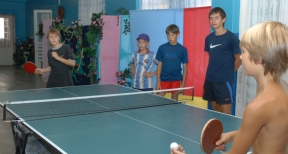 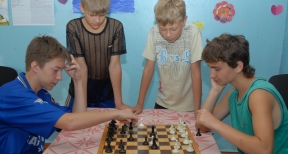 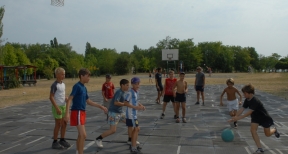 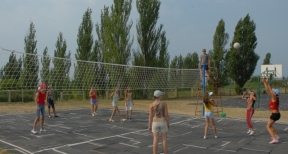 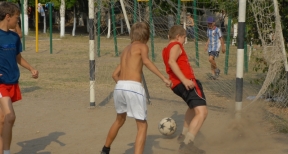 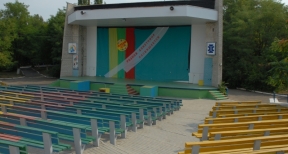 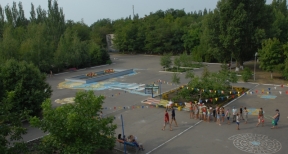 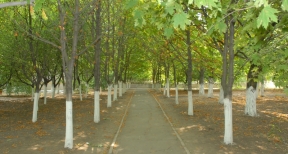 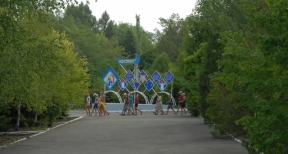 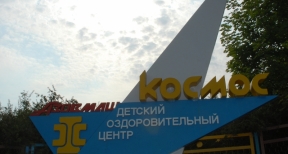